Top-Notch Tips To Stay Ahead Of The Game

In a recent article, we discussed why even successful companies need fresh eyes.   As companies grow, complexity increases. 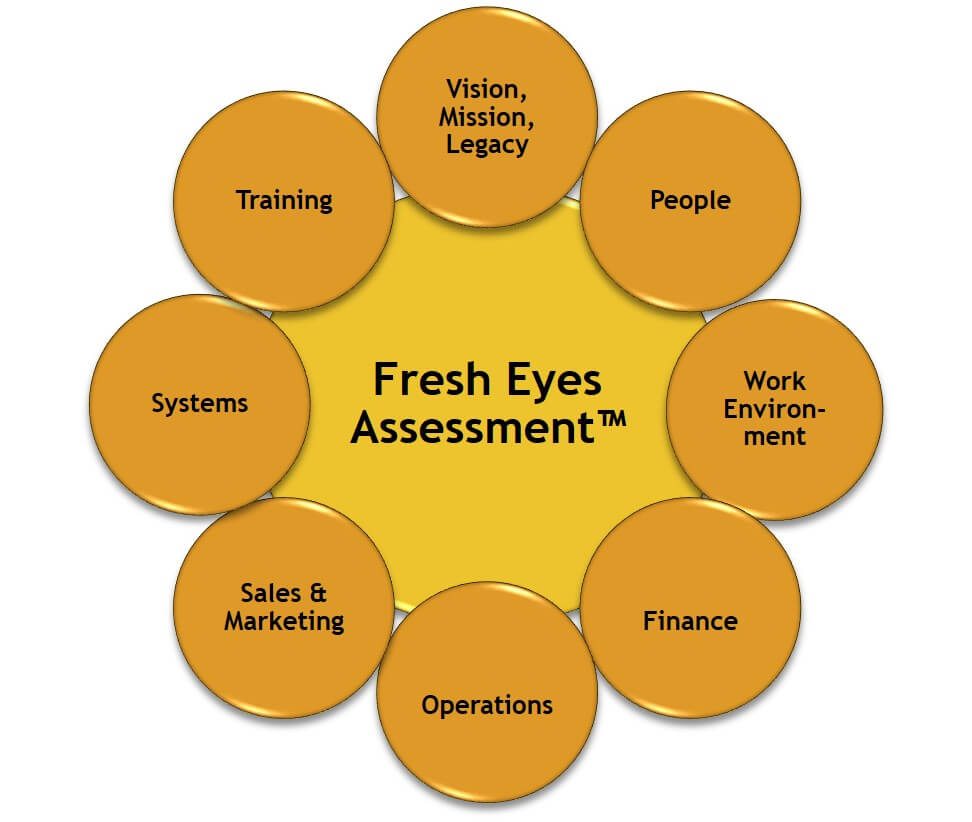 This rise in complexity can make it harder to identify and focus on the things that could improve the company’s bottom line the most.   The Fresh Eyes Assessment™ we provide is fresh, unbiased eyes looking at eight vital areas of your company (see figure).   Here we give you a case study which was kindly provided by Katrin Engel, VP, Union Bank, San Diego Commercial Banking for us to share with you.

In this case study, we are focusing on a comparative assessment of certain key financial indicators.  The results of the assessment suggested some operational changes, highlighting how interrelated the eight areas of the Fresh Eyes Assessment™ are.

To understand where your company stands and stacks up compared to your competition can be particular difficult for privately held companies, due to the lack of comparable data.  A great commercial bank can often be helpful in getting access to such data.

This case study is about a Southern California-based manufacturer and distributor whose goods are manufactured in China and sold to a number of well-known big box retailers in the US.  The company was profitable and has been growing over the last couple of years.

For starters, let’s focus on the impact of the increased accounts receivable days. If this particular company was able to collect their receivables faster by just one day it will realize a savings of $3,575 in interest per year. If the company was able to collect its account receivables in 30 days versus over 60 days, it would save more than $100,000 per year in interest expenses. This effect will be even stronger in a higher interest rate environment.

Of course, we all know that collecting faster from customers with significant market power can be challenging. However, by comparing the internal processes of this company to their industry peers several areas of potential improvement were identified.  In this case, potential cost savings and strategic benefits were found mainly in the area of process automation, in particular how the company processed their cash applications and dealt with exceptions, such as short pays or unauthorized discounts.

Implementing even just some of those suggestions leads to a reduction in the accounts receivable days, saving the company money and improving their cash flow.

Top-notch CEOs know that they cannot sit on their past successes.

Constantly they must ask themselves “What is in my blind spot?  How can we effectively stay ahead of the game?”  A Fresh Eyes Assessment™ is a great way of doing that.  Getting an in-depth look at the financials, using the resources of reliable comparative industry data, is a priceless part of that.  Great commercial banks offer such data to their clients.  It is highly likely that you will arrive at actionable suggestions for effective improvement.

We never know what we don’t know – until we go and find out.  The answers you get may surprise you, save your company a bundle now and position your company even more strongly for the future in a highly competitive marketplace.